We've moved to
Dreamwidth this year!

It's our 10th and final year,
so come join in the fun!

Join Us For Our Tenth and Final Year!

We sincerely hope that you enjoyed this year's RS Games, and we plan to make next year's even better. So if you have any suggestions, comments, issues, etc., this is your chance to let us know.  Please comment below with your thoughts about things that worked or did not work, and know that, with one exception, anything you say or suggest will be discussed and considered.

What's that exception, you ask?  Well, many year's ago, someone suggested that we screen participants, requesting writing and art samples and "weeding out" beginners.  To that we say, NEVER.  The whole point of RS_Games is to make friends and encourage people to spread their wings and be creative. We adore first time writers and artists. We love the newbies, those honing their craft, and the seasoned participant equally.  And we strive to create an environment that allows people to grow and thrive as artists and writers.  When it comes down to it, we simple refuse discriminate.

BTW, all comments are screened, so know that, even if you can't see them, like nargles on mistletoe, they are there!

A gust of freezing wind greeted the Mods as Sirius and Remus rushed through the door. November was always chilly, but somehow the outside air felt unconscionably cold in the warm foyer. From deeper inside the hall, past the thick double doors, came the sounds of a party already in progress.


“Sorry, we’re late, loves,” said Remus. He glanced toward his boyfriend before flashing the Mods an apologetic smile. “Padfoot lost track of time while doing his hair.”


“Obviously, it was worth it,” laughed Sirius, shaking out his wind-blown locks. “Seriously, though, that’s not why we’re late.”


Remus sighed deeply and pinched the bridge of his nose between his finger and his thumb. “Really, Pads, there’s no need to --”


“He lost the map!” Sirius interrupted brightly. “Moony the Cartographer lost the map, so we got hopelessly confused and didn’t know where we were and --”


“I didn’t precisely lose it,” snapped Remus in mock-annoyance. “It blew away in the wind because you were already late and speeding. The chances you take with our lives on that blasted motorbike! Someday I’m quite sure we’ll --”


“... not be late to the party,” finished Sirius. He gave his lover a small peck on the cheek.

brighty18, as Remus, Sirius, and the Mods exchanged hugs.


“You all look great,” Sirius said.

whitestar looked anxiously toward the doors. The volume of the party was only increasing. “We need to get moving,” she said firmly.

pica_scribit with barely concealed glee. “We all want to find out who created what, don’t we?”


“So, now that we’re all in the right place and the right time, are we all ready to go in?” asked


Without asking, he reached into

brighty18’s handbag and began rifling around.


“You seem the sort to carry a mirror,” he muttered when she gave him a quizzical look.


“YOU LOOK FINE!” chorused Remus and all four mods.


“Let’s go! We have statistics to get to!” cried

cackling_madly pushed opened the door, and the six entered a candlelit ballroom, brimming with flowers, balloons, and streamers. An excited hush fell over the glittering crowd as they caught sight of the two guests of honor, followed by a burst of applause.


“Why are you welcoming them, when they were here before you?” Remus stage-whispered. “Do you not understand the workings of time and place?”


The audience laughed, but soon settled down, eager to get on with the announcements.


“This was an interesting year, to say the least,” began Remus. “We started with eighty-four participants from at least twenty countries and twenty-one US states.”


“Five Canadian provinces, too,” broke in Sirius with a smile at

cackling_madly, who returned the grin broadly.


“But,” continued Remus with a cockily-raised eyebrow, “by Games’ end, we had thirty people on Team Place and nineteen on Team Time.”


“And there were plenty of Pinch Hits,” added


“So we got creative,” said


“Very creative!” Sirius confirmed. “In fact, this year, for the first time in Games history, three wonderful, unselfish members of one Team -- Team Place -- donated four Pinch Hits to the other Team. They believed in the Games, and in fairness, so they worked selflessly for the greater good!”


“But who won?” called out a participant. “Who gets the Puppyshipper Gold?”


“Yeah, about that...” began Remus. “If there is one thing I love about the RS Games, it’s that, unlike a Slytherin v. Gryffindor Quidditch match, there is a great sense of fairness, friendship, and good-natured rivalry.”


Remus cleared his throat and continued, “So this year the Mods thought long and hard about fairness. They tallied the votes, and tallied them again. They looked at the kudos and comments and hits on AO3. They thought about the rules they’d explained at the outset of the Games, and the strange, uneven circumstances of the Teams. They discussed --”


“Sweet Merlin, did they actually do anything or just sit around mulling?” Sirius interrupted.


Remus rolled his eyes, clearly accustomed to such outbursts. “Yes. In fact, they did. After much consideration they decided on --” 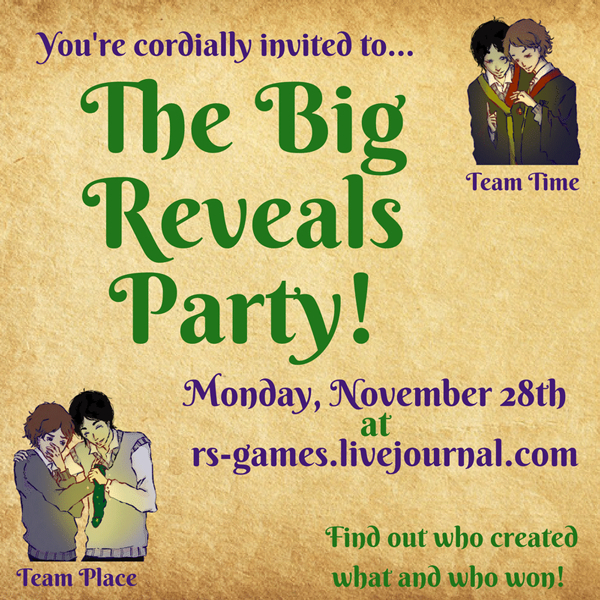 Thank you to everyone who read, voted, commented, recced, and shared this year’s Games entries, and especially thank you to our wonderful authors and artists. We could not do this without you.

Stay tuned in the next few days for the announcement of our winning team, awards, and a listing of Games works with authors and artists revealed!

Well, folks, that's it for posting, but the Games are not quite over. We still have time to read, vote, and comment before the big Reveals Party where we find out who wrote what and which Team won.

Though for many Americans the word "vote" might be a little difficult right now, we still want you to do so here. The polls will remain opened for one more week, closing at 11:59pm EST (UTC -5) on Saturday, November 19th. This is so that those fabulous works posted toward the end still have a chance to garner votes and attention during regular Games play. This is also your chance to still pimp the Games and rock the vote.

After the polls close, the mods will need a few days to tally the votes and prepare and then date and time of the Reveals Party will be announced.

Thank you for being a part of RS_Games 2016!
Collapse